Seventeen months, seven seasons, and eighteen demonstrations after the presidential election, I don’t know about you, but I’ve been waking up most mornings and spending most days cycling between two states of being:

My response to these states of being has generally cycled between two kinds of action:

Cycling among generativity, immobility, self-care, and social engagement has been working well enough, more or less, in keeping me sane and engaged during these trying times, but I do sometimes get a feeling of being whipped around and not entirely in control of where it is I am focusing my energy.

One day I was telling my yoga teacher, Ariel Kiley, that I was bouncing around between states of hopped up creativity, grounded self-care, and existential angst, and that none of them were particularly serving. Ariel noticed that my different states had parallels to the Hindu concept of the three gunas of human consciousness –rajas, sattva, and tamas. I am not remotely an expert on Hindu philosophy, so advance apology in oversimplifying the gunas, but in my basic understanding, sattva represents seeking pleasure and comfort, rajas is centered on passion and activity, and tamas is related to inertia. Those seem pretty close to the alternating states of generativity, self-care, and immobility that I was experiencing.

More importantly, Ariel talked about the search for transcendence beyond the three gunas. It didn’t take me long to realize that the fourth state I was needing more of in that particular moment was social engagement. I needed to channel my creative energies in service to others.

As I thought about that moment when I was feeling hemmed in by three states of being and in search of a fourth, I visualized a pyramid with four points. At that time, my stable base, all on one plane, were the three points of generativity, self-care, and existential angst. It was a fourth point, productive engagement, that I was yearning for that would move me from a flat plane into a third dimension and literally make me feel less flat.

Here’s a simple drawing I made of the pyramid: 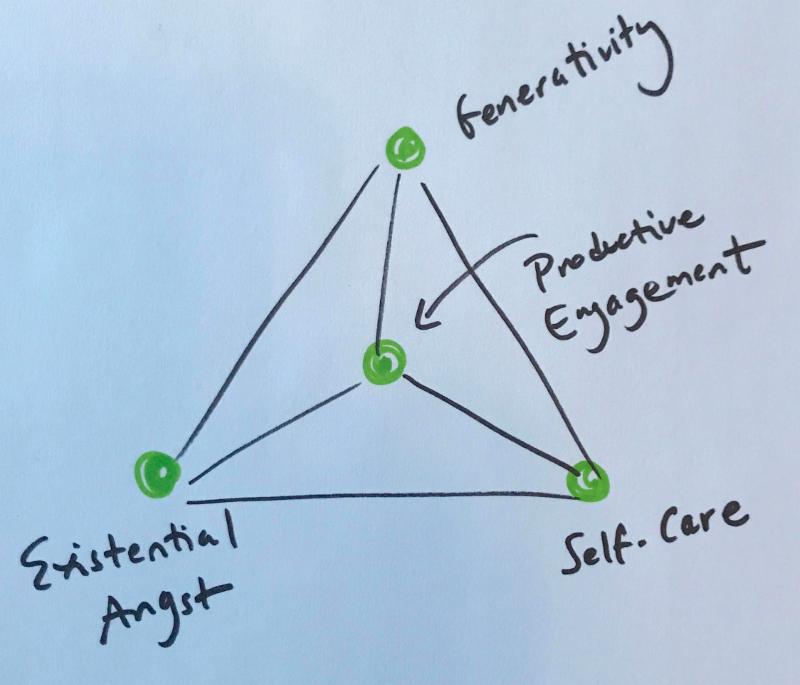 And here’s the model I keep on my desk, made from toothpicks and putty: 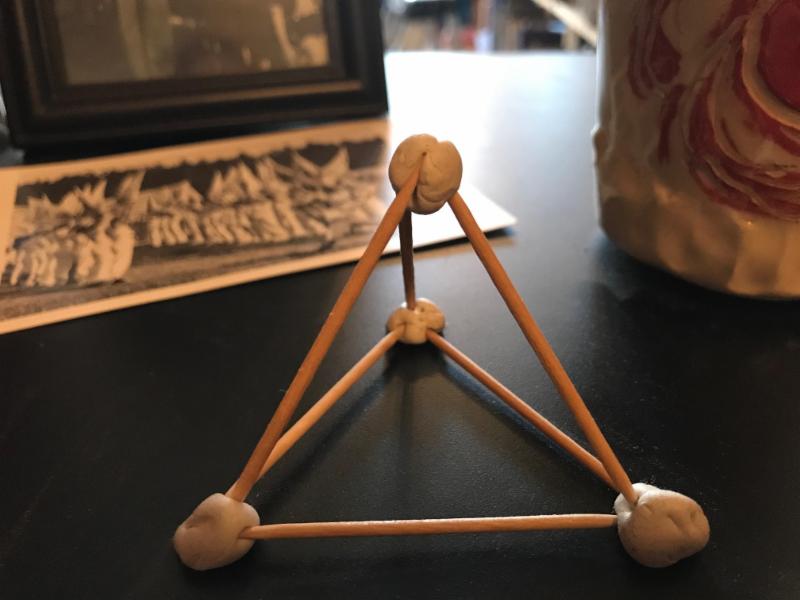 I then started to think about how this pyramid can be rotated. Any three points can form a stable plane of habitual practice from which a person can stretch and yearn for a fourth point that will transform them:

Depending on your needs or circumstances, your stable base of three points will shift. Maybe you are struggling in a cycle of social engagement, generativity, and existential angst. You’re meaningfully engaged with a community, you’re inspired in your learning and connections, and you do occasionally wake up with a feeling of dread that it’s all for naught. You might need to incorporate more self-care in your day. A little time taken away to reflect, move your body, or notice nature may recharge you.

Or maybe you’ve been practicing self-care a great deal, you’re socially engaged, and producing like crazy. But is it meaningful and important? You may actually need to be still for a moment, perhaps even contemplate an existential abyss, so that you can move forward in a way that is more useful to the world.

Try playing with the model and let me know what you think.

The pyramid (tetrahedron, really, if we want to use the proper mathematical term!) feels like a sibling to the torus model that I wrote about in the fall.

Imagine a donut rotating in on itself:

In that newsletter I wrote:

“The torus is an excellent metaphor for the work I do with organizations and communities. When you are working within a torus, you can embrace the not knowing of where you are going, trusting that it will get you somewhere right. When we collectively engage in inner work, we change our external environment.”

In the coming months I will be sharing with a new tool I have been developing that supports organizations and communities in assessing their internal culture in service to making more meaningful impact in the larger word. The tool has an emphasis on how people work with complex challenges that do not have a clear, linear solution, as well as the degree to which there are equity, inclusion, reflection, and self-care practices. Stay tuned!