We did it! We made it through the darkest nights of the year. And we’re still here. Some of us had our reality turned inside-out this summer in the presence of a total solar eclipse (I’m partial to Annie Dillard’s searing essay about the eclipse in 1982), and some of us vowed to make sure we catch it the next time it comes around close to us (meet me in St. Louis, 2024!)

Regardless, our 2017 trip around the sun is done and gone.

This is my end-of-year wrap-up and salutations-to-2018 musings. Read on to review what we have accomplished together!

On the morning of the last day of 2017 I woke up from a dream that I was riding around through the streets of a city on the back of an enormous, gentle elephant. A few nights ago I played a game with friends where we each answered the question: Who would you like to be the boss of? Duh. We all answered “Trump.” And his minions.

Almost everyone I know, personally and professionally, has spent this past year in resistance, in one form or another. Many of us are wiped out. The other day I was biking around Prospect Park –around, around, around like a hamster on a giant nature wheel (it’s been one of my biggest coping and self-care go-tos this past year)– and I challenged myself to reflect on 2017, which feels like an extra-long year that began on November 9, 2016.

I was loathe to think about the totality of 2017, as I thought it would feel dampening and depressing and loathsome. I surprised myself, as I pedaled away, to find myself warming with satisfaction as I realized I had made good on my intention to be in the service of deep, meaningful change and connection in social justice movements, organizations, and communities.

Below are some of the ways I had the opportunity to be in service this year. Because they are all part of larger collective endeavors, I am writing about them from a first-person plural point of view (i.e. “we”). You may find yourself in them, as well! 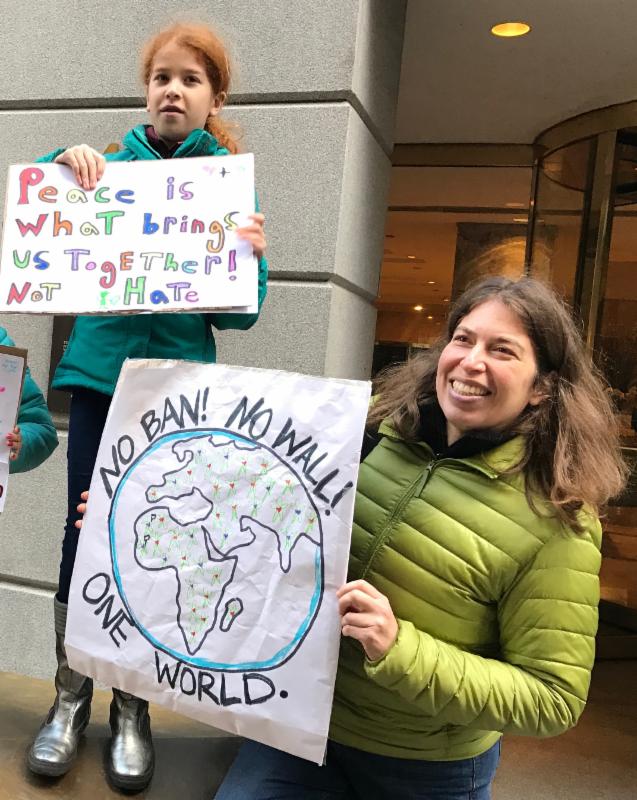 This past Solstice week was a time of joyfully dancing the darkness and gloom away with friends and family. One night found us having a spontaneous living room dance contest, lit by twinkling Christmas lights. Another night we crammed ourselves into Panna II and laughed and dined under even more lights.

We saw an art flick at our hyper-local cinema Video Revival, and we indulged our children and inner children with the latest Star Wars, which I watched mechanically until I perked up at the end when Rose declared to Finn:

“We’re going to win this war, not by fighting what we hate, but saving what we love.”

Indeed. Let’s cherish and protect what we most love this coming year. During the first week of the New Year my husband Andrew Drury and I will be hosting our 100th Soup & Sound house concert, featuring Helen Klonaris, Greek-Bahamian post-colonial activist and writer and Kristin Norderval, Norwegian/American political avant-classical composer. We have been hosting concerts, poetry readings, film, and dance in our living room since 2009.

May your evenings, too, be filled with soup and sound as we welcome the arrival of longer days:

and runs with gardens.

Jewels from the mines glitter in each tree,

« The Torus and Possibilitarianism: Moving Through Today’s Chaos
Cycling Among Generativity, Immobility, Self-Care, and Social Engagement: Finding Your Transformative Point »